This is the start of the Starfield wiki by the UESP. Please note that this wiki is in a very early stage of development, and many things are still being set up!

This site's purpose is to provide information; therefore, most of the content contains spoilers.

We are currently maintaining 98 articles. 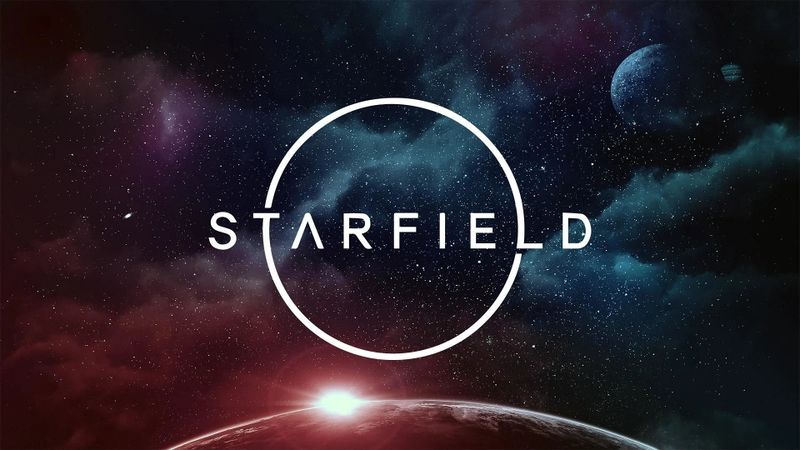 Following off on the heels of the Official Gameplay Reveal, Todd Howard held an interview with IGN to discuss some of the burning questions the demonstration generated. This fifteen minute interview used its time well, and covered a lot of ground in that time. Here is a quick summary of some of the major answers:

You can see IGN's video here, and you can see their own summary of major points here.

The Xbox and Bethesda Showcase started and ended with upcoming Bethesda games. Redfall opened the show, and a fifteen minute presentation on Starfield ended it. The Starfield presentation provided a plethora of information on the game, including basic story information, a preview of the major factions, foot and ship combat, crafting, outposts, and the size of the game.

You can see our article documenting the event here, and you can watch the gameplay reveal yourself over here. The official article on the event can be seen here. 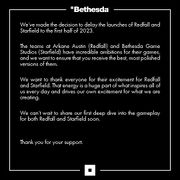 Bethesda has announced today via Twitter that Starfield has been delayed until the first half of 2023. Originally slated for release on November 11, 2022, the game's release date has been pushed out to allow for more development time.

The third numbered documentary video in the Into the Starfield series was The Sound of Adventure. In a departure from the previous entries and introduction video, this video focuses on sound design.

You can find the video here. We also have an article covering this video.

The second numbered documentary video in the Into the Starfield series was Made for Wanderers. The video continued to discuss Bethesda's approach to their games, while also breaking into more direct conversation about the game itself. Various factions were discussed, such as the United Colonies, Ryujin Industries, Freestar Collective, and the Crimson Fleet.

This video can be view on Bethesda's YouTube Channel. You can also see our own article here.

Painting a Journey Through Space Video Released With Giveaway — February 19, 2022

The Official Bethesda YouTube Account has released a new Starfield video in the buildup to the game's release later this year. The video depicts the artist Mike Butkus creating the "Journey Through Space" piece that has previously been seen in a few of the early promotional materials. Besides the video, Bethesda also announced a contest to win a print of the featured artwork. By "joining Constellation", signing up for the official Starfield newsletter before March 31st, you will be entered for a chance to win a print signed by Mike Butkus and Game Director Todd Howard. If you had signed up previously, you are automatically entered into the contest without needing to do anything else.

The official announcement of this video and contest can be seen here, and the video can be viewed here.

Into the Starfield - The Endless Pursuit Released — November 30, 2021

The next documentary video on the Starfield was Into the Starfield - The Endless Pursuit. The video goes into length discussing Bethesda's philosophy towards their games.

This video can be view on Bethesda's YouTube Channel. We also have an article on this topic.

Continuing the effort to provide more information on the game, Bethesda released three videos on major locations in Starfield. The videos covered Akila City, Neon, and New Atlantis, three of the four major cities in the game.

You can see these videos here, here, and here. We also have our own articles on the Location Insights series of videos.

Edit: A similar video was released on October 22nd, although it was not officially labeled as a Location Insight video. This video served as an introduction into the wider setting of The Settled Systems.

Instead of returning to the previous silence on the game, Bethesda followed up their teaser trailer with a short introductory documentary piece on the ongoing development of Starfield the day after. The video features narration from Todd Howard on Bethesda's past and their desire to create a game like this, and how the opportunity to create Starfield only recently arose with new technology.

You can see the video here. Our own article can be found here.

Following up on years of almost total radio silence on the game, Bethesda has released a teaser trailer for Starfield during their 2021 E3 Showcase. The teaser claims to be alpha gameplay in the Creation Engine 2. The two minute video gave a walkthrough of the Constellation Starship Frontier preparing to launch. The trailer would introduce many basic details about Starfield, such as the Constellation organization, the Frontier, Vasco, and basic details about the story to investigate a recent discovery.

You can see the video here, and you can see our article on it here.

After many years of speculation, Bethesda officially announced Starfield on June 10th, 2018. The game was revealed with a very short Announcement Teaser Trailer.

Bethesda has a long history with sci-fi games set in space. One early attempt was a failed attempt to created a game based on Traveller that eventually released as Delta V. Another early effort was a space combat game called The 10th Planet, which was cancelled before its release. Bethesda would have the rights to create games for the Star Trek franchise for a time, during which they published Star Trek: Legacy, Star Trek: Encounters, Star Trek: Tactical Assault, and Star Trek: Conquest. Todd Howard claimed that he pitched a Star Trek RPG during this time, but it was ultimately turned down. The idea for Starfield spent several years coalescing before ZeniMax moved to trademark it in 2013.

You can see the official video here, and you can see our article on it here.

The official announcement would come more than five years later on June 10th, 2018. You can see these initial trademarks here, here, and here. 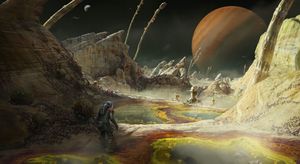 Concept Art provides references for how the finished game should look. A few pieces of concept art have also been released to help advertise the game. (more...) 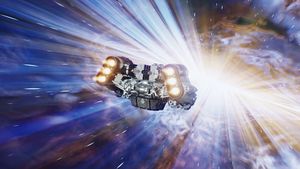 A ship traveling faster than light